Want Actual Change In Your Organization? Nothing Changes Until Behavior Changes

By Peter Turgoose On 5th, January 2021 With No Comments 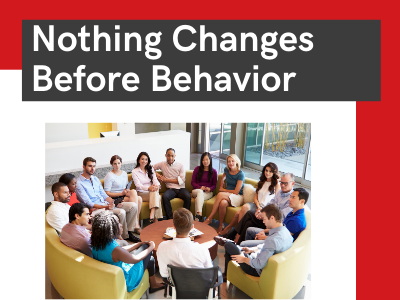 It never ceases to surprise me how often I hear senior leaders saying that the problem they are facing is that people are not behaving the way they want or expect them to. The people they are referring to can be their staff, customers, suppliers, or even key stakeholders or shareholders. They will vent their frustration with phrases like; “They don’t understand”, “They just don’t seem to listen”, “We’ve spent tens of thousands on — , but they just don’t use it”. They may go on to talk about how these people are being resistant to change.

Resistance to change implies that people are actively deciding not to change, that they are fighting against it. In our experience, often this is the leadership transferring the blame for an unsuccessful implementation onto the population(s) that they wanted to see doing something differently. They are not facing a guerrilla movement of people who have actively got together and planned to frustrate and disrupt the plans of the organization. What they are facing are groups of individuals who are content with their old ways of working. They know how to do the work, they understand the old systems, they have historically been rewarded for working in the old way, and no one has complained in the past. They are happy, so why should they change their learned behavior patterns? The truth is that patterns die hard.

Putting new ways of working in place and ‘supporting’ people with communication and training will not change people’s behavior. They will continue to revert, wherever possible, to the old ways of working even if this means developing workarounds to the new ways of working. How often have you seen people develop their own spreadsheets, even though a new system has been ‘implemented’? Nothing changes till behavior changes, and that change in behavior must have begun before the implementation of any change to the work system begins. 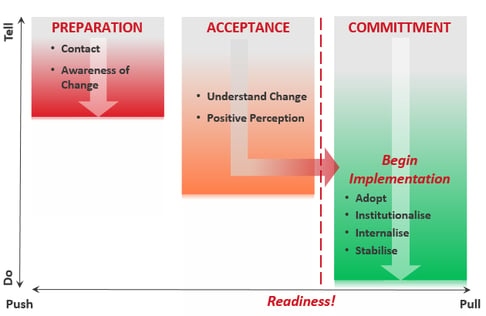 Change Readiness will only be achieved through the planned involvement of the social system, moving it from a point where people feel that change is being pushed upon them to a point where they are ready to change and a pulling for the new ways of working. There is no getting away from the fact that people’s first contact and awareness about upcoming change will come from being told about it. Be sure that they are told by their leaders and not by the internal grapevine! This will prepare them for change to come, but you can’t tell people into acceptance and behavior change.

Acceptance comes from understanding the impact of the change at a personal level and developing a positive perception of that impact. Acceptance also comes through involvement in the design of the change at a personal level. This means being able to try it on and adjust it to fit before implementation begins. There are many ways to achieve this in a well-designed change process, which leaves enough ‘white space’ for people to adjust to fit through techniques such as local design teams, involvement in scenario testing, workplace simulations, etc.

Acceptance begins the behavioral changes and builds change readiness. With this in place, implementation can begin. However, strategies need to be put in place to reinforce the behavior change and move it through institutionalization, internalization, and finally to stabilization.

Peter Turgoose is a Senior Consultant at ON THE MARK.