A Christmas Carol: A cautionary tale about a hybrid working environment

By Peter Turgoose On 15th, December 2020 With No Comments 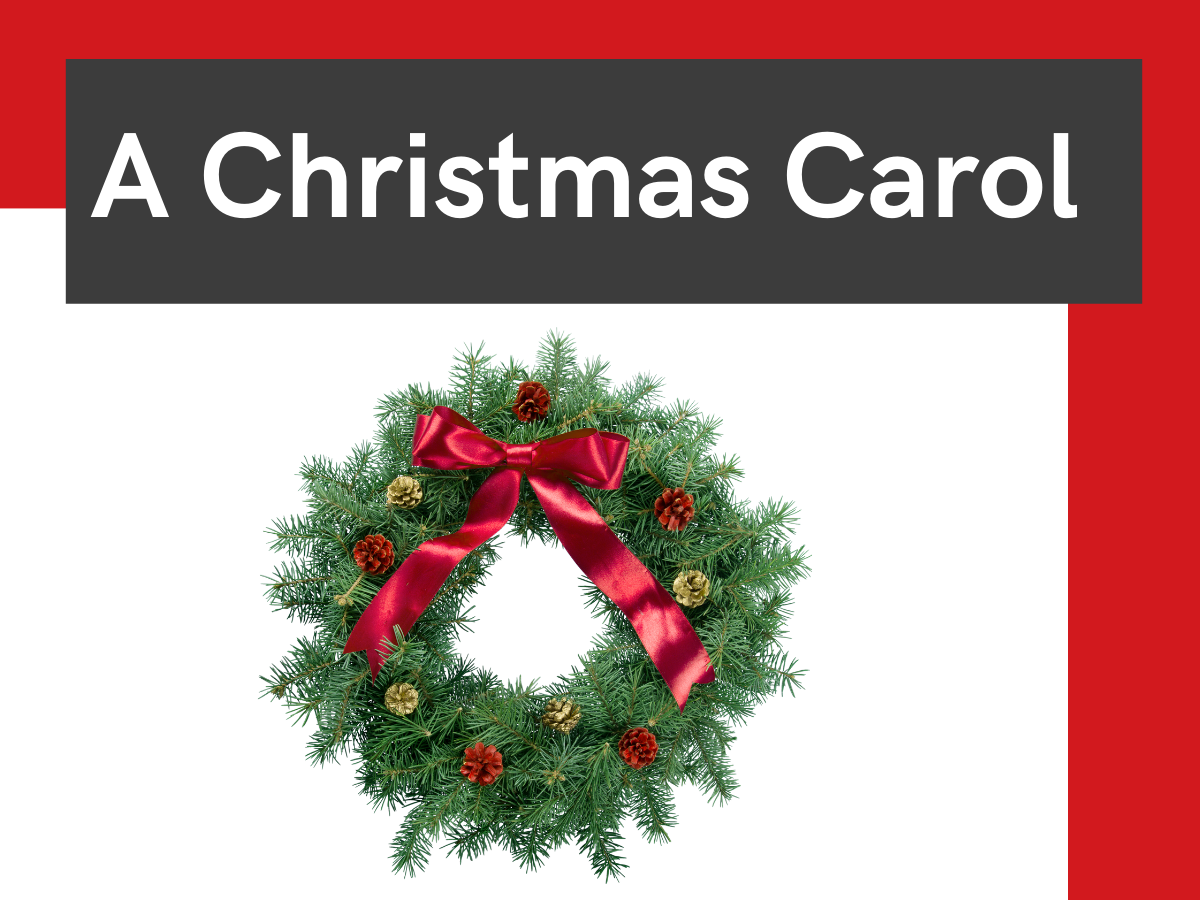 Here at OTM, there are lots of reasons CEO’s contact us for help and advice about a redesign project; a pending merger, a new product line, new channels, cost reduction, the list goes on. However, last week we got a call that was so unusual we thought we would share the story with you.

Don’t forget to stay up to date on all things organization design and sign up for blog notifications.

The caller was Eb Scrooge V, CEO of CSBC the Global Finance Company. For those who don’t know of CSBC, and there can’t be many who don’t know the history, CSBC was formed in 1844 and was originally known as the Cratchit & Scrooge Bank which grew steadily in The UK through the late 19th and early 20th Centuries. Massive global expansion in the late 20th Century under the leadership of Eb’s father, Eb Scrooge IV, saw the rebranded CSBC become the multi-billion-pound financial powerhouse it is today. From its foundation over 175 years ago CSBC has been known for its philanthropy, for the huge Christmas hamper every member of staff from the humble clerk to the Board Directors gets every year, for the fact that 50% of profits go to their Tiny Tim children’s charity, and for their dispersed management system based on a value statement that ‘every office is a branch of the Cratchit/Scrooge family’.

When Eb called we asked what had caused him to pick up the phone and contact a boutique Organisation Design consultancy, we did not expect the answer we got! Enigmatically, he started by saying ‘I had a dream, in fact I had three’, and it turns out that all the dreams were about CSBC’s famous ‘Family Christmas party’ – every year every CSBC office has a company funded Christmas party to which every member of staff and their family are invited.

In his first dream Eb had been at a party in Christmas past, it has been the London office, but it could have been anywhere. Everybody knew everybody else; they know each other’s families, everybody knew what everyone else in CSBC did, they were not talking about work, everybody was having fun and enjoying being at the party, looking around the room he could see everybody mixing no matter what their role in CSBC was. In his own words, Eb described the dream as a snapshot of everything he had worked for, an organisation that performed well through teams of people that knew their roles and the roles of others, that knew both what needed to be done and how to get it done, a team in which everybody felt they were part of the Cratchit/Scrooge family. To crown it all off, the business was outperforming the stretching targets it had set itself. In our words as organisation design professionals, the operating model was ‘fit for purpose’.

The next night Eb had dreamed about this Christmas, Christmas present. Sadly, there was no Christmas party because of restrictions imposed due to the Covid-19 pandemic. Eb’s dream had taken him into the living rooms of some of his staff as they prepared for Christmas with their families. The CSBC hamper had arrived and families were excitedly examining the contents and thanking the company for it. However, all was not well and once the kids were in bed the grown-up conversation turned to work, to how it had been hard and even lonely working virtually, how they missed popping across the office to find the answer to a question, how it took longer to solve problems, how they didn’t really know the new staff at all, how their manager was getting much more involved in day-to-day work in a way they hadn’t before, how they were worried about rumours that that the big City offices may close and be replaced by smaller local offices that people would visit one of two days a week. Eb was worried by his dream, particularly as his board had discussed a future scenario where people came into the office less often, they believed that people enjoyed working from home and they saw the disposal of expensive City property as a win-win in terms of overhead cost reduction and improved staff morale.

The following night Eb had had his final dream, the dream that had prompted him to seek our advice. Eb’s final dream took him back to the office Christmas party, but this time it was two years hence in Christmas future. At the party he saw people he did not recognise, he noticed less people had brought their families along, managers were gathered talking in one huddle whilst frontline staff were gathered in other huddles, some of the conversations were about the ‘good old days’, about how work is not fun anymore and even boring, how the Christmas hamper was nice but that saying thank-you once a year like that showed how out of touch managers were.

Poor Eb was distraught, the default future (The future that will come to pass if he does nothing) was not the legacy he wanted to pass on the next generation of the CSBC family. He felt he had made the right decisions in the circumstances he found himself facing; closing the offices and switching to virtual working to protect staff, planning to move to smaller satellite offices to reduce overhead costs, responding to employee needs by moving to hybrid home/office working for all. Was this just a bad dream, or had he set his organisation on a trajectory to the bleak future he had seen?

Like many organisations, CSBC moved very quickly to respond to the challenge the pandemic presented, fortunately Eb is now asking what now? We talked to Eb about some of the unintended consequences of the force-majeure changes CSBC have made.

Every change to a business operating model, no matter how small it may seem, will have a consequence. Moving work from a fixed office base where people know each other to individual remote locations requires new mechanisms to replace the cohesion and ways-of-working that come from colocation. We know that people feel closer to, and have more trust in, people that they know. The rapid growth of Zoom (There are other platforms) meetings may maintain contact, but it does not in itself build trust. In a remote working world where collaboration is more difficult, managers having to make fast decisions can result in more top-down direction. We have learnt that enforced remote working can have adverse impacts at both an individual and a family level, there is a big difference between needing to work remotely and wanting to work remotely, mental well-being* needs to be addressed at an individual level.

On a more positive note, we talked to Eb about using our collaborative Accelerated Change Readiness (ACR) approach, creating time and space for CSBC employees to work together to design their future working environment. The call ended with Eb recognising that the pandemic had accelerated CSBC unprepared into the future, that there was no turning back but where they were now was unsustainable. However, he saw that there was a way to change the default Christmas future.

Dreaming of a better future.

The next day Eb called back and together we laid the plans for CSBCs ACR approach to moving to his vision of a new working environment, a hybrid model of home-working, local satellite offices and a central core in a big city, which still lives the core value of ‘every office is a branch of the Cratchit/Scrooge family’. Staff across the Globe are already involved in the design process making decisions about their future, including; 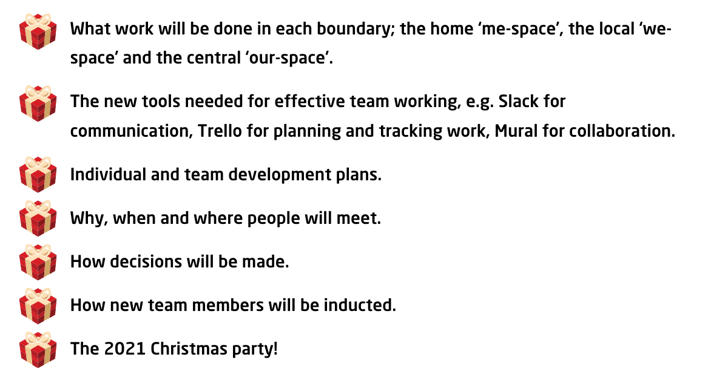 2020 will still not be the Christmas Eb might have dreamed of a year ago, but by using ACR to ready CSBC staff for the change to come he is now confident that the bleak default Christmas future that he dreamed of a week ago will not now come to pass. Tonight, Eb is dreaming of a Christmas future where the whole CSBC family have a Happy Christmas in 2020 because they are involved in the project to design a (Christmas) future where of ‘every office, be it home, satellite or core, is a branch of the Cratchit/Scrooge family’.

*The World Health Organization describes mental well-being as a state of well-being in which the individual realizes their own abilities, can cope with the normal stresses of life, can work productively and fruitfully, and is able to make a contribution to his or her community.

If you’re thinking about transforming your business, considering how sustainable the change will be is a decision many people don’t consider – but need to. Contact us to learn how OTM uses collaboration to design and implement sustainable transformation.

Peter Turgoose is a Consultant at ON THE MARK.