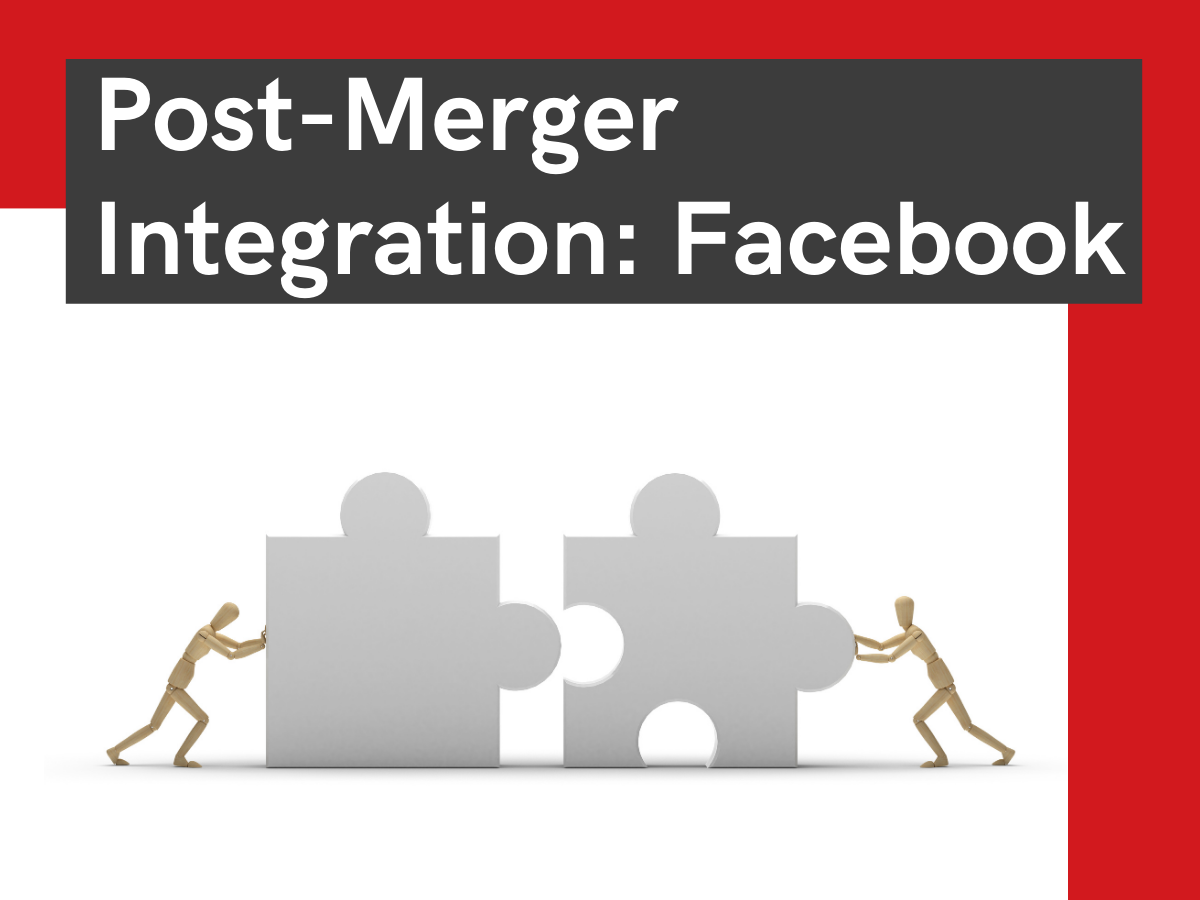 The merger and acquisition game is a risky one. Anywhere from 70 to 90 percent of acquisitions fail. But these numbers aren’t at all shocking if you consider the sheer scale of change that must happen for it all to go smoothly.

The process takes more than just a reshuffling of desks, new and lost colleagues, and rebranding. Instead, success depends on the top-to-bottom post-merger integration.

Facebook announced recently that it was integrating three of its service offerings together. Having purchased Instagram in 2012, then WhatsApp in 2015, the move is unsurprisingly traditional for a large corporation. The big names in the sector are nothing like the start-up companies they once were, neither in behavior or in terms of operating model. They are setting new norms in terms of creation of new markets and technology usage.

However, these tech giants are also fundamentally corporate money-making machines and therefore their decision-making tends to follow a similar pattern that we’ve known for a very long time. Create customer value and follow the money.

Facebook originally claimed that both Instagram and WhatsApp would remain separate from their core messaging service. Yet, the move to integrate the platforms was in the end a logical conclusion for Facebook and may have been intentional from the start. Facebook’s original claim to maintain the messaging platforms separate may have been a political maneuver to satisfy regulators in the EU. The three platforms perform similar functions and because only the backend will undergo integration. Users shouldn’t experience much difference at all. It’s low hanging fruit in terms of operational logic and management of resources.

From a design perspective, the problems are the same as any other integration effort. The design parameters have been set and the backend operations and systems need alignment. This alignment and post-merger integration should, if done correctly, create efficiency gains as a result.

The likely fallout is a reduction of employees needed to maintain the systems as well as reduced operational costs. Another possibility is capacity release to grow further. In the case of Facebook, my guess is this is more about freeing up talent and capacity than it is about cost cutting. My prediction is that talent will be repurposed for new projects and investments in other parts of the business. After all, the war for talent is strong in the locations where the company recruits.

How to Approach Post-Merger Integration

1. Identify where the organization is now

As an organization design consultant, I would take a traditional approach to understanding the issues. Facebook is a large, complex corporate entity with many of the same issues we have witnessed before, despite the fads currently floating around the organization design world.

The point is the issues are systemic across the whole system. They are also complex. Large organizations require breadth and depth of design concepts, as well as understanding of the wider operating environment. Therefore, you need to analyze the prevailing issues through using a whole systems model such as the OTM Adapted Star Model (see below). 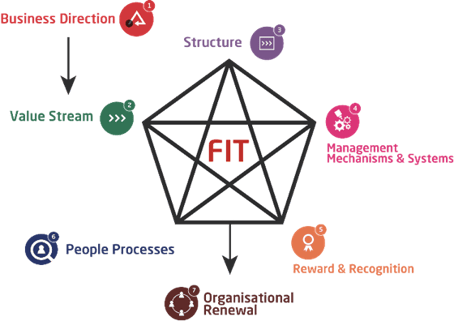 Once these core elements for value creation have been identified, assessed, and we are satisfied that there is sufficient information, we can create a core operating model concept design based on the design parameters that we have now developed. This model visualizes how the company is going to bound work together or separate it to simplify the higher value stream into logical and manageable parts. Then, a company can divide the work into work groups.

The fundamental principles of organization design haven’t actually changed. The main focus of a company is value creation. The next question is how to best divide that value stream into logical groups and activities that form smaller, more manageable units. Regardless of whether these units are called departments, divisions, functions, teams, squads, crews, a bunch of grapes, the concept of bundling work into logical groups remains the same.

4. Decide on a method of managing between and      within groups

Following this, we create connecting mechanisms or ‘glue’ between groups, as well as an agreed method of ‘managing’ the flow of activity across and within the groups. Managing the flow between groups falls within the role of the manager.

There is a lot of empty talk about trendy managerial arrangements that has no basis in science or practice. However, always keep in mind: What someone says or what lies in a book or on a website doesn’t always equate to valid information. Always question where this information comes from. Is it grounded in substantial evidence?

5. Involve employees in the process

The next step in the process becomes more detailed and with it comes an expediential increase in involvement of company workers. The key lesson here is that the CEO or Board usually isn’t very familiar with what it takes to do most of the work. The employees in the company do and they therefore need to be front and center of the redesign efforts. Of course, you can do this work without involving the employees. However, this method isn’t as effective.

People Support what they help create

Imagine this comparison. A family member or roommate comes home one day and tells you that they have commissioned an architect to remodel your home. The builders have already toured and given the quote. Work starts the following week.

Now, my guess is that most people would be deeply upset. Not only have you been excluded from the decision-making, you’ve also been cut out of the whole process. And yet, you’ve been told to upend your whole life as someone else rebuilds your home. A similar feeling of helplessness holds true in organizations.

We have close relationships with our colleagues. If someone dictates a fundamental change in the business without your involvement, it not only undermines confidence, it personally hurts. In addition, the norms of business behavior tend not to lend themselves to outpouring the many normal human emotions we all experience. Bottled up frustrations from being excluded from the change process can lead to situations in which people express themselves through resistance. Even if the change is otherwise a rational organizational decision, frustrated employees may rationalize their refusal to cooperate through sheer frustration.

Part of a consultant’s role might be to assist in understanding the substantive issues and the social response to a situation. These are also substantial projects, but to the same scope as the technical design of the organization.

Involving people in the design effort not only reduces likely resistance to change, it gets issues and problems on the table earlier on when they can be resolved more easily. Involvement during post-merger integration not only makes sense from a social perspective, it makes sense for the long-term success of a change initiative and cost perspective.

Dr. Stuart Wigham is a Content Manager and Consultant at ON THE MARK. OTM is a boutique organisation design firm with offices in the UK and US. Its experience and passion for collaborative business transformation is supported by pragmatism, systems thinking, and a belief in people.